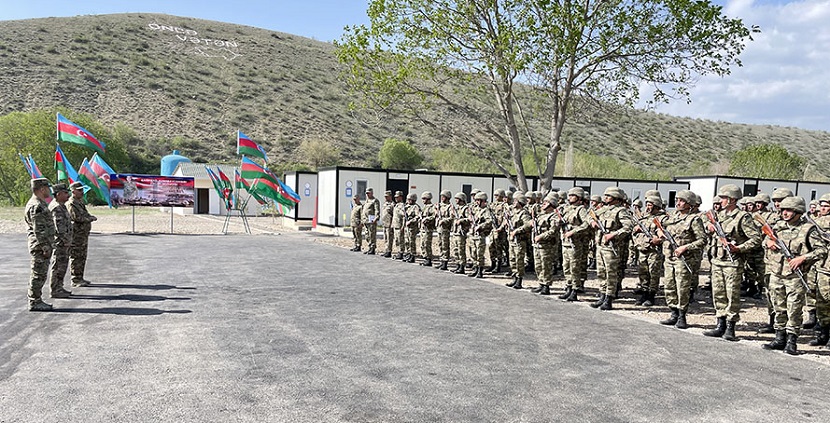 Thanks to the attention and care of Azerbaijani President, Supreme Commander-in-Chief of the Armed Forces Ilham Aliyev, activities aimed at improving the social and living conditions, as well as increasing combat readiness of servicemen serving in the Azerbaijan Army continue, the country’s Defense Ministry told News.Az.

Deputy Defense Ministers - the Chief of the Main Department of Logistics, Lieutenant General Nizam Osmanov, and the Commander of the Land Forces, Lieutenant General Anvar Afandiyev inspected the recently built infrastructure commissioned for the use of military personnel.

It was noted that the infrastructure that was built taking into account modern requirements meets all the necessary needs of military personnel. There is a headquarters building, barrack, bath and sanitary facility, food warehouse for storing food, clothing warehouses, boiler room, ideological room, office premise, amenity premise, and weapon room. The canteen building designed to feed the military personnel is provided with modern household appliances and inventory.

Generators have been installed to provide the area with uninterrupted electricity. In addition, a sports camp has been built for the effective organization of leisure time of servicemen. Landscaping works have been carried out in the area, and various trees have been planted.

The deputy ministers gave relevant instructions to further improve the social and living conditions of servicemen.

Then, Lieutenant General N. Osmanov and Lieutenant General A. Afandiyev met with the military personnel, enquired about their concern, and congratulated the servicemen on the upcoming Ramadan holiday on behalf of Colonel General Zakir Hasanov and wished them success. The servicemen thanked the Supreme Commander-in-Chief and the leadership of the Ministry of Defense for the provided excellent conditions, attention, and care.

In the end, the relevant instructions of the Minister of Defense were delivered to the military personnel, and a group of distinguished servicemen was awarded valuable gifts.