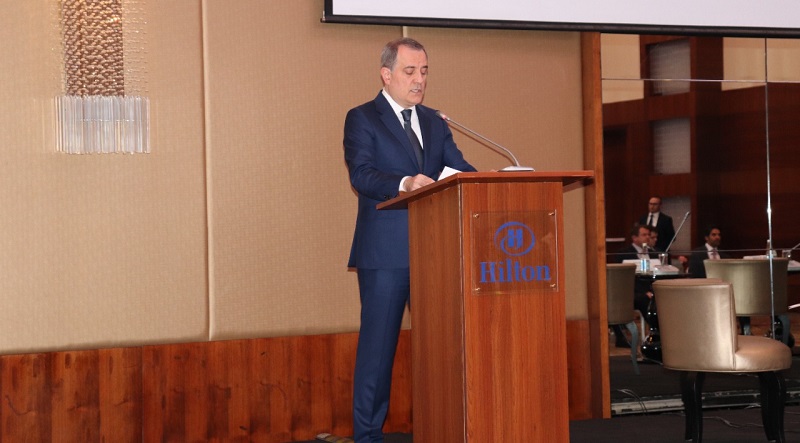 As the incumbent Chairmanship of the Movement, Azerbaijan has identified the African continent as one of its priority regions to focus on during its tenure, said Azerbaijani Foreign Minister Jeyhun Bayramov.

He made the remarks while speaking at a conference on “Legacy of African continent in the evolution of the Non-Aligned Movement” dedicated to Africa Day, which was held in Baku on Thursday, News.Az reports.

The minister noted that Azerbaijan’s cooperation with African countries traditionally develops at an ever-increasing rate, becoming more active in scale and extending to new dimensions. “The level and the intensity of our contacts with African countries are growing. The systematic work is being carried out in order to strengthen and diversify the existing cooperation.”

Bayramov recalled that in 2011, Azerbaijan received observer status with the African Union, and in 2014, Azerbaijan’s Ambassador to the Federal Democratic Republic of Ethiopia was appointed as the country’s Permanent Representative to the African Union.

The top diplomat hailed the positive dynamics observed in relations with Africa during Azerbaijan’s Chairmanship of the Non-Aligned Movement (NAM).

“Constituting almost 45 percent of the membership of the Non-Aligned Movement, African countries have always been the flag-bearers of the Movement since its inception. They have been actively engaged in advocating the values and founding principles of the Movement. On its turn NAM has supported and played a significant role in the decolonization process,” he said.

Bayramov stressed that since the assumption of the chairmanship of NAM coincided with COVID-19 pandemic, Azerbaijan, in its both national and NAM chair capacities, has spared no effort to promote the global initiatives that aimed to minimize the impact of the pandemic on the developing countries, particularly on African countries.

“In its national capacity, Azerbaijan has provided a significant amount of financial and humanitarian assistance to the African countries, including through Azerbaijan International Development Agency, to minimize the impact of crisis situations on African people. Azerbaijan also made a contribution to the development of education in Africa and carried out joint projects with UNESCO, in the field of girls` education,” he added.