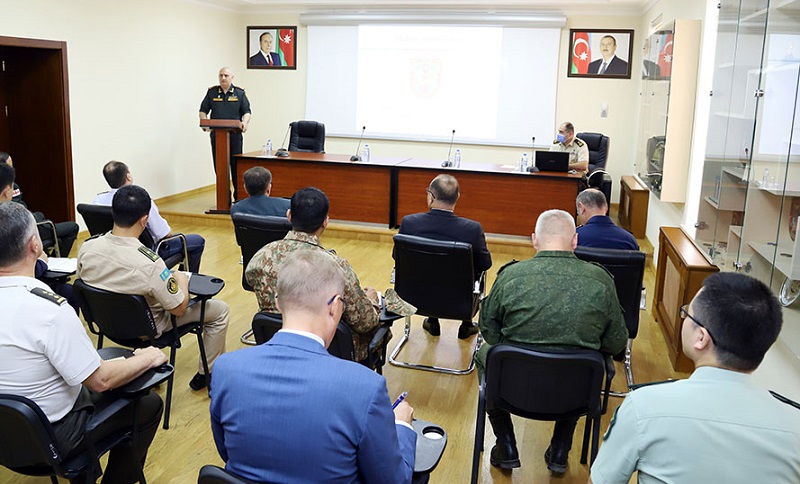 On September 13, the Chief of the International Military Cooperation Department of the Ministry of Defense, Major General Huseyn Mahmudov, briefed military attachés accredited to the Republic of Azerbaijan.

The foreign military representatives were informed in detail about the large-scale provocations committed by the Armenian armed forces in the Dashkasan, Kalbajar and Lachin directions, the Defense Ministry told News.Az.

It was noted that the main purpose of the Armenian side's regular shelling of Azerbaijan Army positions is to delay the signing of a peace treaty, as well as large-scale restoration and construction work carried out in the liberated territories.

It was brought to the attention of international representatives that Azerbaijan complies with the obligations of the Trilateral Statement of November 10, 2020, and is interested in establishing peace in the region through the start of demarcation and delimitation of borders and the signing of a peace treaty between the two countries. By laying mines in Azerbaijani territories and on the supply roads, the opposing side demonstrates behavior contrary to the statement. This is evidence confirming Armenia's military adventurism and revanchist position.

It was noted that 1390 PMN-E type anti-personnel mines produced in Armenia in the years 2019-2021 were detected just in the territory of Kalbajar and Lachin regions.

Despite the fact that to date, the engineer-sapper units of the Azerbaijan Army have detected and neutralized a total of 7559 anti-personnel mines, 2348 anti-tank mines, and 10052 unexploded ordnance, buried by the Armenian armed forces in the liberated territories, sabotage groups of the opposing side mined supply roads and territories between the positions of the Azerbaijan Army Units during the night of September 12. This act and the large-scale provocations of Armenia led to military confrontation in the Dashkasan, Kalbajar, and Lachin directions.

At the briefing, it was emphasized that the retaliatory measures taken are aimed at ensuring the safety of Azerbaijan Army Units, as well as civilians involved in restoration and construction work in the liberated territories.

It was reiterated that the military-political leadership of Armenia bears the entire responsibility for the tensions, confrontation, and losses caused by the large-scale provocations.