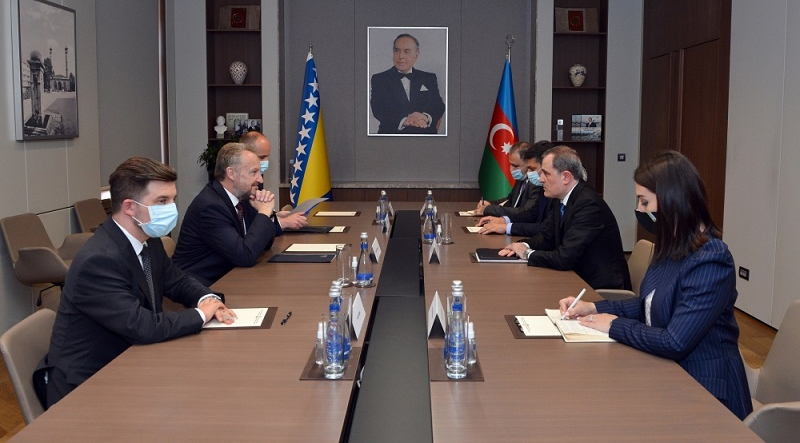 Azerbaijan’s Foreign Minister Jeyhun Bayramov has met with Speaker of the House of Peoples of the Parliamentary Assembly of Bosnia and Herzegovina Bakir Izetbegović, who is on an official visit to the country.

Minister Bayramov hailed the friendship and cooperation between Azerbaijan and Bosnia and Herzegovina, the Foreign Ministry told News.Az.

He noted that the continued support of the two countries for each other's sovereignty and territorial integrity, along with respect for the basic principles of international law is at the heart of bilateral relations.

Izetbegović stated that he paid his second visit to Azerbaijan and witnessed the development in the country. He noted that Bosnia and Herzegovina supports Azerbaijan's position, which is based on international law. Speaking about his visit to the city of Aghdam as part of his official visit to Azerbaijan, the speaker expressed regret about the scale of destruction in these areas.

Izetbegović emphasized the importance of finding a common ground for coexistence with neighboring countries while referring to his country as an example.

The Azerbaijani FM highlighted the current situation in the region, especially the recent tensions at the border, as well as Azerbaijan's adherence to a negotiated settlement of the existing disagreements, the threat of landmines in the liberated areas, and the restoration and reconstruction process.

The sides also discussed prospects for the development of bilateral relations, and cooperation within international organizations.

It was underscored that the reciprocal opening of embassies in both countries will have a positive impact on the development of bilateral relations.