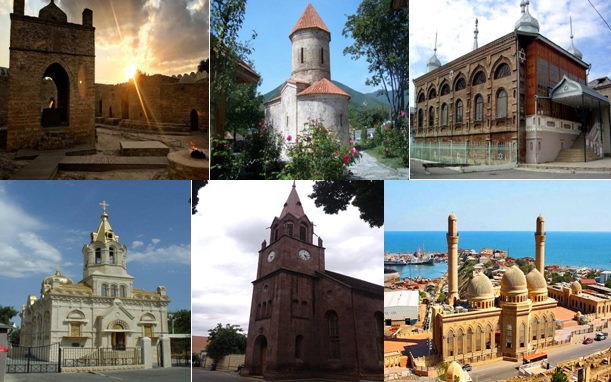 Human is the supreme being. From this point of view, people's living in safe and peaceful conditions has always been a priority issue and is still topical today.

Azerbaijan is a tolerant country where people of different nationalities and religions have historically lived in conditions of friendship and brotherhood. Multiculturalism, which includes the concepts of coexistence, and religious tolerance has ancient roots in Azerbaijan.

The values of humanism and multi-ethnicity which are characteristic of the Azerbaijani people have played a role in the peaceful coexistence of ethnic groups with different faiths and beliefs in the country for thousands of years, and in the preservation of ethnic-cultural diversity to this day.

Many of the ethnic groups living in the republic are represented by one village, and sometimes by several families. For centuries, they have been living in peaceful conditions, they have not been pressured by anyone, and they have kept their language, culture, and traditions alive from generation to generation.

Despite the fact that the official state religion of Azerbaijan is Islam, followers of different religions live here in mutual understanding. As an example of this, we can show the village of Nij in the Gabala region. The inhabitants of this village are Christians. Their Christianity differs from traditional Christian sects in many important ways. These words can also be said about the Malakans living in the village of Ivanovka in Ismayilli.

These values have become the leading norm of social and political life in Azerbaijan, where traditional relations of friendship and brotherhood, and tolerance prevail among people. This was repeatedly emphasized by the President of Azerbaijan Ilham Aliyev. Various people living in the country are provided with all conditions to preserve their national-spiritual values, religious beliefs, and traditions, and develop their language and culture.

All citizens of Azerbaijan have basic human rights and freedoms, regardless of their language, religion, or ethnicity. Due to such factors, Azerbaijan can be considered an example of tolerance for the countries of the world.

Speaking of friendly coexistence, it is appropriate to mention the Mountain Jews, who have a long history of living in the territory of Azerbaijan. Milikh Yevdayev, head of the religious community of mountain Jews in Azerbaijan, said in the article "Jerusalem of the Caucasus: the legendary Red settlement" published in the American publication "The Jewish Journal" in 2015: "This is our homeland, our Red settlement. Here is Azerbaijan."

Milikh Yevdayev also writes that representatives of all peoples in Azerbaijan, regardless of their ethnic or religious affiliation, consider this land their indivisible homeland: "It is no coincidence that in the early 1990s, in order to protect the territorial integrity of Azerbaijan, a large number of mountain Jews voluntarily joined the army and went to fight against the invaders." The name of one of those fighters, Albert Agarunov, who was awarded the title of "National Hero of Azerbaijan" after his death, is always held in high esteem by the people of Azerbaijan.

Such a sensitive and serious approach to tolerance of the people and the state of Azerbaijan actually stems not only from respect for the past but also from the desire to build a healthy future. Because in a society where the principles of tolerance are not established, it is impossible to hold inter-religious and intercultural dialogue, and most importantly, to maintain socio-political stability and ensure rapid development.

Azerbaijani society has come out of the trials it has historically faced, whether on religious or national grounds, without succumbing to any provocations

The article focuses on the religious and national tolerance, development of interethnic relations