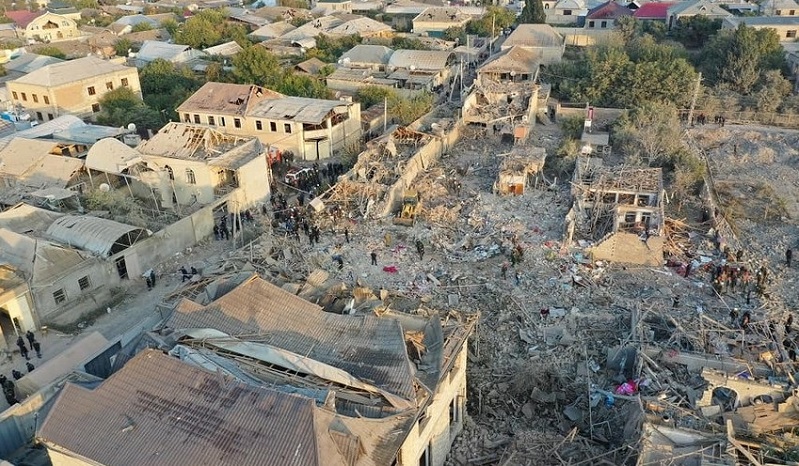 Exactly two years ago today on October 11, 2020, Armenia fired ballistic missiles and rockets at the residential areas of Ganja, the second largest city of Azerbaijan. Intriguingly, Ganja attack happened a few hours after the ceasefire agreed between Russian, Armenian, and Azerbaijani foreign ministers in Moscow on October 10, 2022. By violating the requirements of the achieved humanitarian ceasefire regime, Armenia once again clearly displayed that they ignore the norms and principles of international law.

It should be noted that during the 44-day war, Armenia repeatedly shelled Ganja, located hundreds of kilometers from the front, on October 4, 5, 8, 11 and 17 with rockets and heavy artillery. As a result of these attacks, 26 civilians, including 10 women and 6 children, were killed, 175 people, including 57 women and 32 children, were injured. In addition, more than 10 multi-apartment buildings and more than 100 facilities were damaged. In connection with the shelling of the city of Ganja, a criminal case has been initiated in the General Prosecutor’s Office of Azerbaijan under the relevant articles of the Criminal Code.

Targeting civilian areas located outside the zone of hostilities, Armenia, on the one hand aimed at spreading terror among the civilian population, but on the other hand, indirectly endeavored to conceal its defeat on the battlefield and raise its ‘reputation’ among own people.

By taking this step, Pashinyan’s government counted on inciting Azerbaijani army and expanding the geography of the conflict. Instead, Azerbaijan’s armed forces have wisely reacted and merely targeted military objectives in retaliatory strikes. As a result of the counter-offensive operations that started on September 27, the Armenian army did not stand up and Azerbaijani army liberated the occupied territories within just 44 days.

It must be noted here that Ganja attack was not the first time that Armenia fired on the civilian population to compensate for the defeats it usually suffers in the operating theatre. This has already happened several times in 1992-1994, in 2016, in July 2020.

Armenia, by targeting the civilians of Ganja, Barda, Tartar and other densely populated cities of Azerbaijan, definitely committed acts of terrorism and war crimes. That was indeed the continuation of the scenario – that Armenia did in Khojaly and Bashlibel. Therefore, as these acts have evidently been carried out by the direct instructions of the military and political leadership of Armenia, it clearly indicates Armenia’s state policy of terrorism.

Unfortunately, neither the international organizations nor the OSCE Minsk Group co-chaired by France, the Russian Federation, and the United States did not react adequately to the Armenian war crimes. This silence, as expected, encouraged the Armenian criminals to launch new attacks.

To sum up, international community should categorically condemn the fact that the armed forces of the Republic of Armenia ignore the universal norms and principles of international law as an act of war crime. By doing that, they would contribute to ensuring justice and peace in the entire region.