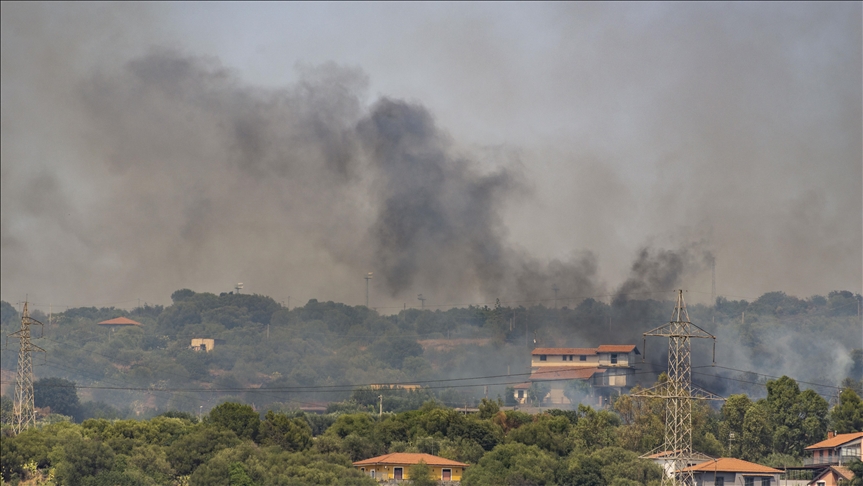 A man aged 77 died while trying to save his cattle, after his home was ravaged by a blaze near the town of Grotteria in the Calabria region, according to the municipality.

The town's mayor in cooperation with local emergency services issued an alert requiring residents not to leave home but for compelling reasons, due to the vast fire front engulfing most of the borough.

Two other wildfires were threatening vast swathes of Calabria's Aspromonte National Park since early Wednesday including the renowned Santa Maria di Polsi sanctuary, cutting off the main road leading to the facility and forcing pilgrims and residents to flee, Ansa news agency reported.

Three Canadair water-dropping planes plus a helicopter and five firefighter squads were deployed in that area, according to the national Civil Protection Department.

A second man aged 79 also died in the province of Reggio Calabria on Wednesday, while a 30-year-old farmer lost his life near Catania, Sicily, after being crushed by his own tractor while trying to extinguish the fire threatening his farm, according to Ansa.

The Civil Protection sent some 70 volunteers to Calabria and 150 to Sicily to help local firefighters.

In its latest update released after an emergency meeting late on Wednesday, the Civil Protection said they were asked to launch 32 operations in one day with Canadair planes in southern Calabria, Sicily, Sardinia, Basilicata, Apulia, and Campania regions as well as central Lazio region.

Firefighters have been deployed in 528 operations against bushfires across the country over the last 12 hours, the Fire Corp said on Thursday.

The wildfire emergency combined with a severe heatwave hitting Italy since early this week, with temperatures exceeding 40 degrees Celsius in several areas.

The Civil Protection had issued a severe alert for the entire territory earlier this week, warning the worst situation could concern the major islands of Sicily and Sardinia, where "maximum temperatures could near 45 degrees Celsius in some inland areas."

A record temperature of 48.8 degrees was registered in the Sicilian province of Siracuse on Wednesday, according to the daily data gathered by the regional meteorological agency (SIAS).

The alert will last throughout the week, which was forecast as the hottest of the whole summer.