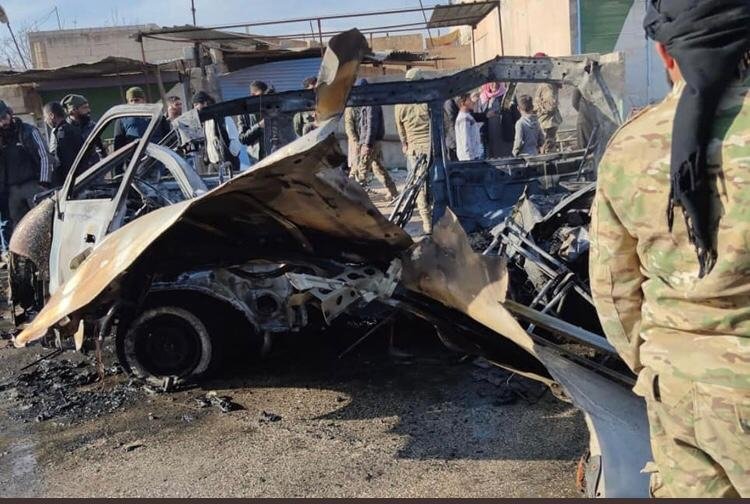 A woman and a child were among those killed, the Britain-based Syrian Observatory for Human Rights said.

At least three of the victims killed were civilians, but the identity of the other two was not immediately clear. Four others were wounded, it said.

On Dec. 10, a car bomb killed 16 people including two civilians and three Turkish personnel at a checkpoint in the town.

In July, a blast from an explosives-rigged motorbike ripped through a vegetable market, killing at least eight people, including six civilians.

Ras al-Ain was freed from YPG/PKK terrorists on Oct. 12, 2019, as part of Turkey's Operation Peace Spring was launched on Oct. 9 to secure Turkey's borders by eliminating the terror group from northern Syria east of the Euphrates River and aid in the safe return of Syrian refugees and ensure Syria's territorial integrity.

However, the YPG/PKK terrorists continue attacks in the Tal Abyad and Ras al-Ain districts despite pulling out of areas under a deal reached by Turkey and the U.S. on Oct. 17.

Since then, Turkish soldiers and institutions have implemented a wide range of measures to eradicate traces of terrorism in the liberated Ras al-Ain and Tal Abyad provinces by repairing hospitals and schools, demining the region and providing vital COVID-19 aid.

Tal Abyad and Ras al-Ain, together with other liberated areas, have been put back on the road to normalization with Turkey's rebuilding efforts. Citizens frequently voice that daily life is getting better as a result of the reconstruction of infrastructure, while roads and waterworks have also been repaired.

Syria's civil war has killed more than 387,000 people and displaced millions from their homes since starting in 2011 with the brutal repression of anti-government protests.