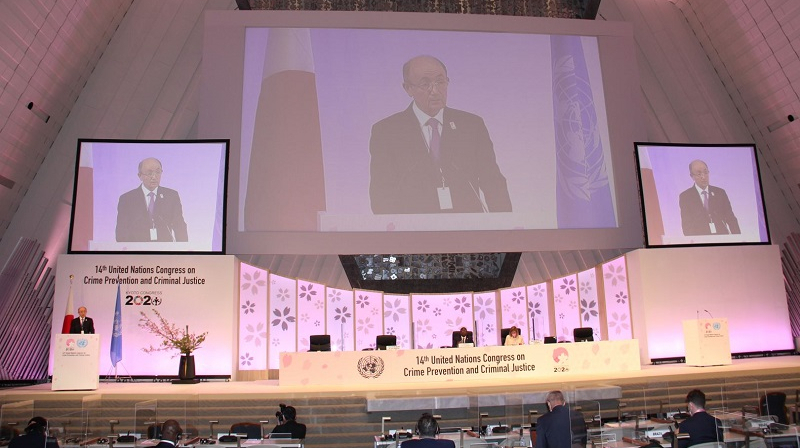 The 14th UN Congress on Crime Prevention and Criminal Justice will be held in Kyoto city, Japan, from March 7 to 12, 2021, the press service of Azerbaijan's Justice Ministry said on Monday.

Heads of state and government of the UN member states, ministers of the interior and justice, attorneys general, members of governments, leaders of influential international organizations took part in the work of the forum, organized every five years, directly and online.

At the event, the Azerbaijani delegation is represented by the Minister of Justice of Azerbaijan Fikrat Mammadov.

At the opening ceremony of the event, which was organized by the Japanese Ministry of Justice, Prince Hisako Takamodo and Prime Minister of Japan Yoshihide Suga, UN Secretary-General Antonio Guterres, Chairmen of the General Assembly and the Socio-Economic Council of the organization, as well as Minister of Justice Yoko Kamikawa and Prosecutor General of the host country made speeches.

The presentations were followed by the high-level plenary sessions. The first to speak in person on behalf of Azerbaijan and 120 member states of the Non-Aligned Movement (NAM), which is chaired by Azerbaijan, was Minister of Justice Fikrat Mammadov.

During his speech, which was broadcast live on the UN website, the Minister of Justice of Azerbaijan emphasized the decisive measures to prevent crime in our country under the leadership of the head of state, large-scale reforms to improve the efficiency of justice, the use of the electronic court, Azerbaijan's high international ratings in these areas, important steps taken to humanize the penal policy in our country, serious work to combat corruption, and also spoke about the Azerbaijani ‘ASAN Service’ brand, which is perceived abroad with great interest.

The event participants were informed that, under the leadership of President of Azerbaijan, Supreme Commander-in-Chief Ilham Aliyev, the native Azerbaijani lands were liberated from the 30-year Armenian occupation, about the war crimes committed by Armenia, especially the involvement the country of hired terrorists from foreign countries in hostilities contrary to the norms of international law, the purchase of weapons and ammunition by the Armenian diaspora by deception and other illegal means, sending them to the conflict zone on flights of civilian airlines under the pretext of humanitarian aid.

Mammadov noted that during the occupation, infrastructure was destroyed in the liberated lands, including the destruction and looting of historical, cultural, and religious monuments, illegal economic activity, and other criminal acts.

The attention of the Congress participants and the entire world legal community is drawn to the criminal actions of Armenia, an appeal was made to all states to bring to justice those responsible for these actions, which pose a threat to peace.

Speaking at the event on behalf of the Non-Aligned Movement (NAM), a statement was made reflecting the position of the NAM on issues arising from the agenda of the Kyoto Congress.

The statement, which was agreed with all member states of the NAM, in accordance with the proposals of the Azerbaijani side, emphasized the need to prevent the use of charitable organizations to finance terrorism, expressed concern over acts of vandalism during the conflict, destruction or looting of cultural heritage, and also contained calls for the return of illegally exported cultural property to their rightful owners. Trying to avoid these well-grounded accusations, which attracted the attention of the congress participants, the Armenian side made fabricated statements against our country and Turkey, however, their lies were completely exposed by the weighty evidence of the Azerbaijani delegation.

During the meeting, the Kyoto Declaration aimed at strengthening measures to combat global crime was adopted. This important five-year program document fully reflects the provisions that meet our national interests on the basis of Azerbaijan's proposals.