Armenians were resettled to Hadrut from Iran in the 19th century, Azerbaijani president says 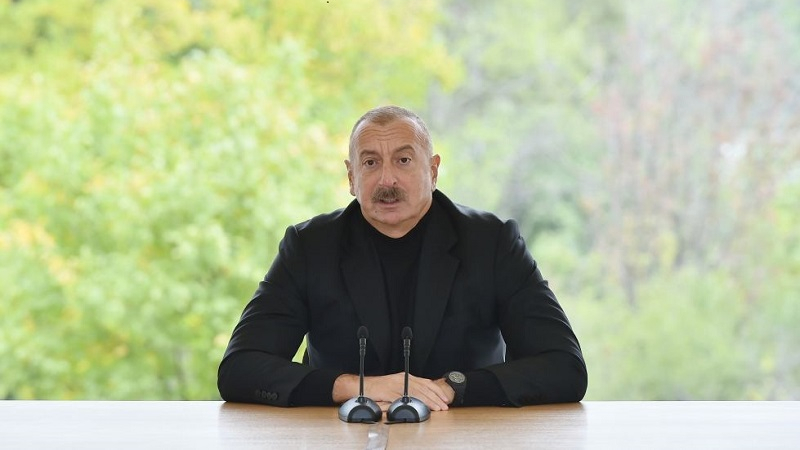 The Armenians were resettled to Hadrut from Iran in the 19th century, President of the Republic of Azerbaijan Ilham Aliyev said as he addressed a meeting with members of the general public of Khojavand district.

The head of state recalled that the Azerbaijani public is well aware that there was a lot of false information in the Armenian media about the Hadrut operation.

“After we had already cleared all the mountains around Hadrut of the invaders, it became clear that the liberation of this settlement was simply a matter of time. We were determined to liberate the settlement with minimum losses, and we succeeded in doing that. The Armenian leadership and the Armenian defense ministry was stating that Hadrut was still in the hands of the Armenians. They claimed that they had allegedly resorted to another tactical retreat and had already returned to Hadrut by removing Azerbaijani soldiers from Hadrut. Seeing all these lies, I was simply amazed because it was crystal clear that Hadrut was already in our hands. I ordered that the Azerbaijani flag be raised in Hadrut to put an end to these lies of the Armenians. After that, after Azerbaijani soldiers and officers had raised our state flag in Hadrut and reported to me, the Armenian official propaganda admitted that Hadrut was under the control of the Azerbaijani Army,” he said.

“This shows yet again that the Armenian propaganda was based on lies during the occupation, during the war and in the post-war period. Their history is false, their past is false, their statehood is false and their mythology is false. Armenians of the world have simply created the false impression in the countries where they live that the Armenian people have allegedly lived on these lands for centuries. The Armenians were resettled to Hadrut from Iran in the 19th century. Everyone knows that. There were no Armenians here prior to that. They have falsified history and are still falsifying the present-day realities. During the war, we heard many lies from the Armenian authorities. There was so much false, so much absurd information coming from their Ministry of Defense – it is probably worth changing its name to the ministry of falsehood – that the international experts and we were simply amazed. The extent of the lies about Hadrut had reached its peak. The liberation of Hadrut caused a profound moral and psychological shock in Armenia,” President Aliyev added.