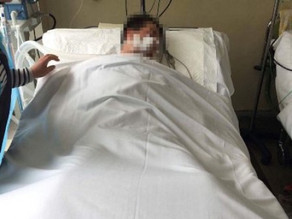 No one from the Armenian Defense Ministry asked about the condition of the serviceman.

In Armenia, a soldier was hospitalized in a serious condition.

Report informs with reference to Armenian site orer.am that the soldier Davit Tadevosyan, who serves in one of the military units stationed in the occupied Khojavend region of Azerbaijan, was first placed in the Jabrayil hospital, then in the Khankendi hospital, and was sent to Yerevan on May 1.

According to the soldier's mother, who has not recovered for two weeks, none of the Armenian Defense Ministry has asked her son.

Another son of a woman also serves in Armenian army. According to her, although when his nose was broken during the service, the relevant structures did not take steps for his operation.

A woman who lives with her family in the village of Yeghegnavan, Ararat district, complains that, in addition, they stopped supplying gas to her house. The soldier's mother is also dissatisfied with the attitude towards the Armenian soldier. According to her, they do not mention the causes of her son's illness. Although the hospital soldier was diagnosed with epilepsy, the causes of the disease are not called. The woman notes that her son's condition remains severe.