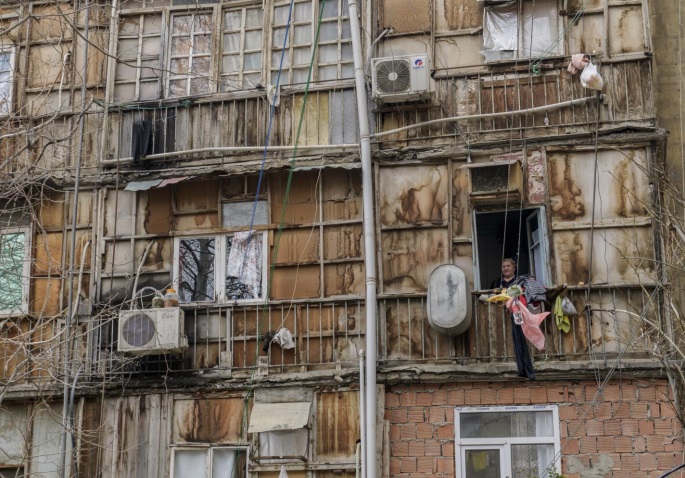 In its report called “Life in a Box” Amnesty International says that according to Azerbaijani government statistics, an estimated 8,000 Azeri civilians were killed in the conflict between 1988 and 1994. All of the people interviewed for this report experienced grave violations of their rights during those years: some were harassed and intimidated into fleeing; others saw their homes targeted with explosive devices or burned to the ground; while still others fled artillery attacks by the Armenian military on populated civilian areas. These experiences left lasting impressions and, in some cases, impacted the long-term physical and mental health of displaced people.

The report refers to Azerbaijani Eighty-eight-year-old Hasan M., who was 60 at the time he fled his home in Kalbajar region amidst intense fighting in 1993, recalled the difficulties he and others faced in escaping the violence. “Walking many kilometres through the snow on foot is very difficult as an older person,” he said. “A lot of people who were my age struggled.” (Page: 6)

Another part of the report says that the Armenian forces committed and oversaw the widespread destruction or seizure of civilian property and infrastructure, including cultural property, in the regions of Azerbaijan they occupied in the 1990s. Almost all of the people interviewed for this report said that, according to younger relatives or others who had visited their villages or towns and brought back photos or videos after the 2020 conflict, their homes, and in some cases even trees, gardens, and gravestones, had been destroyed. (Page: 6)

Report includes suffer of Azerbaijani refugees. “When more than half a million people from Nagorno-Karabakh and the seven surrounding districts were forcibly displaced to other parts of Azerbaijan in the 1990s, many were forced to live in overcrowded tent camps, dormitories, schools, sanitorium buildings, or abandoned railway cars, sheds, or buildings. They shared toilets and showers with dozens of people, and sometimes lived without electricity, heat, or running water. They struggled to meet their basic needs and pay for essential food and medication”. (Page: 6)

The report includes Prospect of Return And The Way Forward also. It says that in Azerbaijan, where Armenian forces destroyed much of the civilian housing and infrastructure in districts seized in the 1990s, that is a monumental task, and the Azerbaijani government has earmarked 2.2 billion manats (US$1.3 billion) in both 2021 and 2022 for demining efforts and rebuilding infrastructure. (Page: 7) While their interviews with Azerbaijani refugees almost all of them told Amnesty International that they had witnessed civilian deaths during the fighting or while fleeing. Several people said that older people from their communities were more likely to be killed or injured because they had health issues or disabilities that made them unable or slower to flee. “For example, Ibrahim O., a 60-year-old man who fought with Azerbaijani forces during the 1990s conflict, recalled going back to his village in Aghdam district to recover bodies after intense fighting there in 1994: “Five out of nine people who had died were close to 90 years old, and the rest were over 50 [years old]. The Armenian attack was very sudden, so most of the people who were older could not flee”. (Page: 14)

The report also includes that under international humanitarian law, civilian objects, including homes and other civilian infrastructure, are protected from military attack unless they become military objectives; the targeting of civilian objects as well as indiscriminate or disproportionate attacks that destroy or damage civilian objects are prohibited. The “extensive destruction and appropriation of property, not justified by military necessity and carried out unlawfully and wantonly” amounts to a war crime. As the occupying power in these areas, Armenia was also prohibited from destroying or seizing civilian property, “unless required by imperative military necessity,” which could again amount to war crimes. In addition, any targeting of Azerbaijani cultural property, including religious monuments and institutions as well as museums and artefacts, was prohibited and a war crime. (Page: 15)

“Ali S., 82, who is from Lachin, a region that borders with Armenia and which contains the only road connecting Armenia with Nagorno-Karabakh, spoke of his fears of returning: “My only concern and fear is that the issue is not resolved. Some of our lands are under the control of [Armenians] and personally I don’t trust them. I will go back, but I have the feeling that someday they could do something to us. Mehriban M., 72, who is from Martuni, which is still under Armenian control, said that before the war her house was targeted with an explosive device and that ethnic Armenian police forces then told her family to leave the town. About returning, she said: “I have huge security concerns when it comes to living close to Armenians… There is lots of trauma between our two nations, I know lots of people who were killed.” (Page: 27-28)

The report touches upon landmines issues also. It says that in 2021 alone, Azerbaijan removed 41,503 landmines and unexploded ordnance (UXO) from regions previously under Armenian control. Demining and UXO remediation efforts are still ongoing. Azerbaijan has repeatedly called for Armenia to hand over maps of existing landmines. As noted above, on page 15, the director of the Azerbaijan Campaign to Ban Landmines said it was extremely unlikely that the maps provided by Armenia to date have captured the complete picture of the landmine situation in the region. (Page: 28) According to the UN Guiding Principles, the relevant authorities “have the primary duty and responsibility to establish the conditions, as well as provide the means, which allow internally displaced persons to return voluntarily, in safety and with dignity, to their homes or places of habitual residence.” Armenia should do everything in its power to facilitate demining efforts, including by transferring information about the location of landmines.

As a Conclusions and Recommendations to The Armenian Government Amnesty International in its reports recommends:

Ensure independent and impartial investigations are conducted into allegations of war crimes and other serious violations of international humanitarian law, including crimes against older people, and that anyone against whom there is sufficient evidence of responsibility should be prosecuted in fair trials;

Fully cooperate with demining efforts in Azerbaijan, including with the exchange of the most accurate and comprehensive landmine maps available;

Without delay, provide full and adequate reparations to all victims of violations of international humanitarian and human rights law, including older people;

Fully respect international humanitarian law, including the obligation to protect civilians from the effects of hostilities, affording special protections to older people, among other groups.