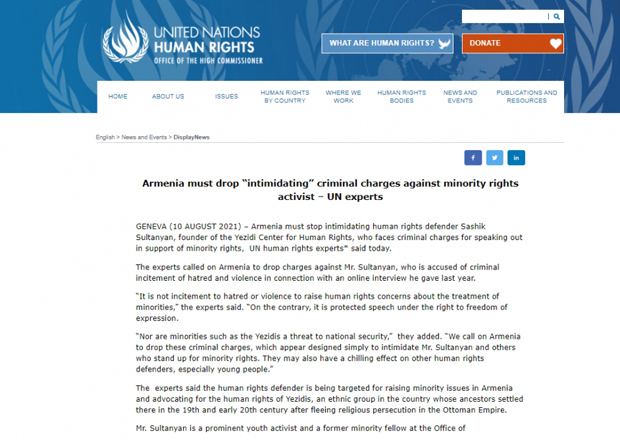 The Armenian authorities must end their prosecution of Human Rights Defender Sashik Sultanyan, Founder of the Yezidi Center for Human Rights, who faces criminal charges for speaking out in support of the rights of national minorities, said the UN experts in the field of human rights protection.

“The experts call on Armenia to drop accusations of incitement to hatred and violence that allegedly took place in last year's interview with Sashik Sultanyan. They report that expressing human rights concerns for minorities is not an incitement to hatred or violence, but rather an expression of freedom of speech. National minorities such as the Yezidis do not pose a threat to national security,” the experts said.

UN experts in the field of human rights protection stated that the human rights defender is being persecuted precisely because he raises issues of national minorities in Armenia and defends the rights of the Yezidis.

Sashik Sultanyan is a prominent youth activist, participant in the human rights internship program at the Office of the United Nations High Commissioner for Human Rights.

The National Security Service of Armenia opened a criminal case against him in November 2020, but he was informed about this only in May of this year. The reason was an interview about the problems of the Yezidis in Armenia, which he gave to the website Yezidinews.am. The case went to trial on August 4, and if convicted, he faces three to six years in prison.

UN experts are in dialogue with the Armenian government on this matter.