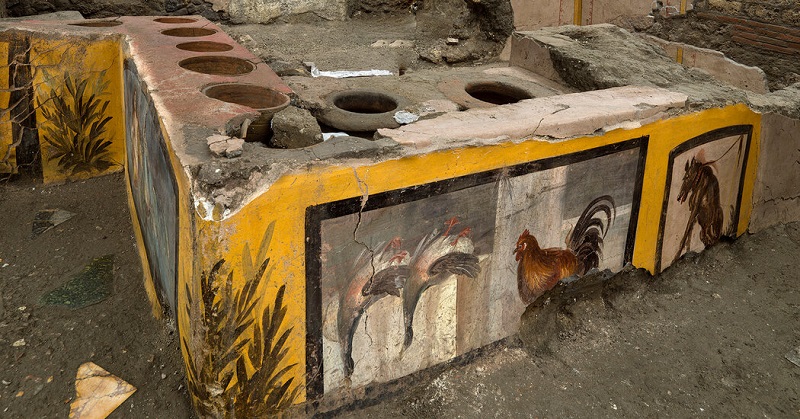 Archaeologists have discovered an ancient snack stall in Pompeii, Italy.

The snack bar, also known as a 'frescoed thermopolium' - from the Greek word "thermos" meaning hot, and "poleo" meaning 'to sell' - was found buried in volcanic ash, and is exceptionally well preserved.

Pompeii was an ancient city in Italy, which became buried in ash and mud when the nearby volcano Mount Vesuvius erupted in 79AD, killing many thousands of people.

This volcanic ash meant that many items and people were perfectly preserved for thousands of years, and archaeologists looking at the site are learning lots about how the ancient people lived. 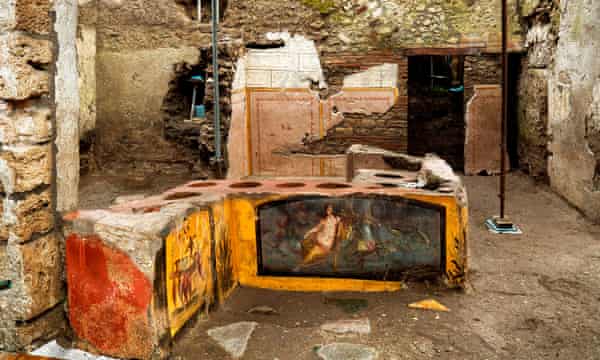 This snack stall is one of many that have been discovered by archaeologists in the ancient city of Pompeii, however, this one, is the first to be fully excavated.

Researchers found that the stall was covered in paintings of a nymph and a dog on a lead, as well as pictures of animals that might have been on the menu, like ducks and a rooster.

In some of the food pots, researchers discovered tiny pieces of duck bone as well as bones from pigs, goats, fish and even snail shells.

Interestingly some of the ingredients were discovered in the same pot together, to perhaps make an ancient Roman-style paella.

As well as food, archaeologists also discovered that the stall sold wine, and found some crushed fava beans in one pot, which the researchers think they added to change the flavour.

Archaeologists continue to make lots of discoveries in Pompeii, but they are excited about this discovery, as it helps to give us an idea people lived and ate back then.