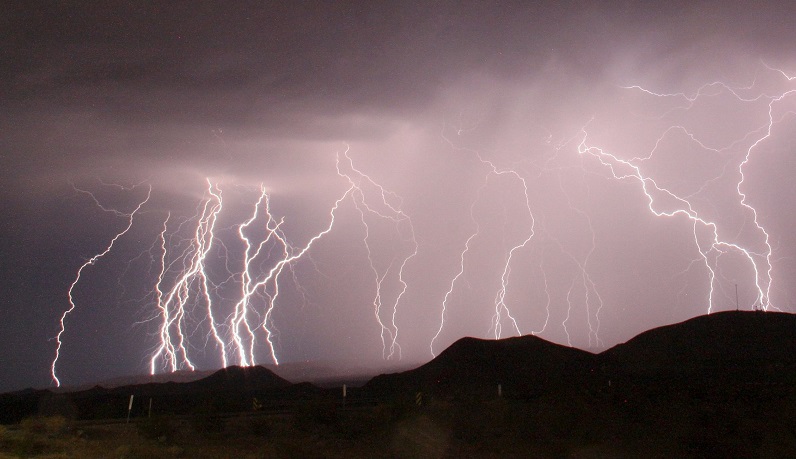 The emergence of the Earth's first living organisms billions of years ago may have been facilitated by a bolt out of the blue, or perhaps a quintillion of them, according to new research Tuesday, in which researchers said that lightning strikes during the first billion years after the planet's formation roughly 4.5 billion years ago may have freed up phosphorus required for the formation of biomolecules essential to life.

The study may offer insight into the origins of Earth's earliest microbial life – and potential extraterrestrial life on similar rocky planets. Phosphorus is a crucial part of the recipe for life. It makes up the phosphate backbone of DNA and RNA, hereditary material in living organisms, and represents an important component of cell membranes.

On early Earth, this chemical element was locked inside insoluble minerals. Until now, it was widely thought that meteorites that bombarded early Earth were primarily responsible for the presence of "bioavailable" phosphorus. Some meteorites contain the phosphorus mineral called schreibersite, which is soluble in water, where life is thought to have formed.

When a bolt of lightning strikes the ground, it can create glassy rocks called fulgurites by super-heating and sometimes vaporizing surface rock, freeing phosphorus locked inside. As a result, these fulgurites can contain schreibersite.

The researchers estimated the number of lightning strikes spanning between 4.5 billion and 3.5 billion years ago based on atmospheric composition at the time and calculated how much schreibersite could result. The upper range was about a quintillion lightning strikes and the formation of upwards of 1 billion fulgurites annually. Phosphorus minerals arising from lightning strikes eventually exceeded the amount from meteorites by about 3.5 billion years ago, roughly the age of the earliest-known fossils widely accepted to be those of microbes, they found.

"Lightning strikes, therefore, may have been a significant part of the emergence of life on Earth," said Benjamin Hess, a Yale University graduate student in earth and planetary sciences and lead author of the study published in the journal Nature Communications.

The researchers examined an unusually large and pristine fulgurite sample formed when lightning struck the backyard of a home in Glen Ellyn, Illinois, outside Chicago. This sample illustrated that fulgurites harbor significant amounts of schreibersite.

"Our research shows that the production of bioavailable phosphorus by lightning strikes may have been underestimated and that this mechanism provides an ongoing supply of material capable of supplying phosphorous in a form appropriate for the initiation of life," said study co-author Jason Harvey, a University of Leeds associate professor of geochemistry.

Among the ingredients considered necessary for life are water, carbon, hydrogen, nitrogen, oxygen, sulfur, and phosphorus, along with an energy source.

Scientists believe the earliest bacteria-like organisms arose in Earth's primordial waters, but there is a debate over when this occurred and whether it unfolded in warm and shallow waters or in deeper waters at hydrothermal vents.

"This model," Hess said, referring to phosphorous unlocked by lightning, "is applicable to only the terrestrial formation of life such as in shallow waters. Phosphorus added to the ocean from lightning strikes would probably be negligible given its size."