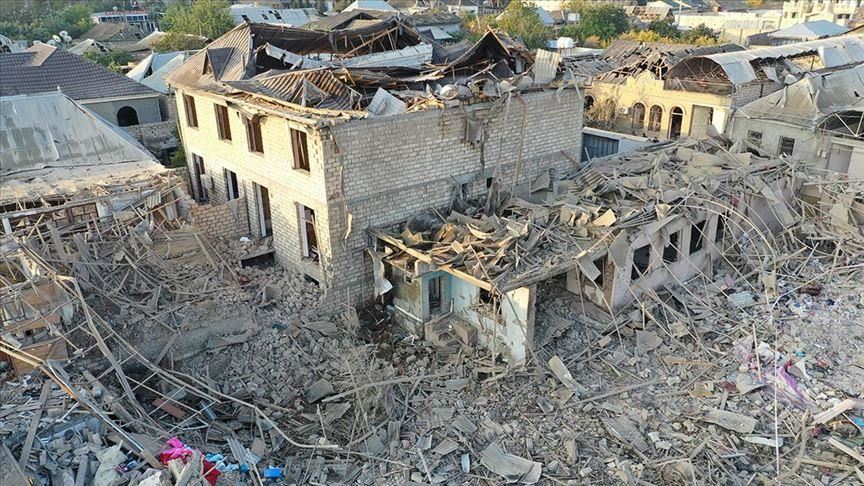 The organization said that by using these imprecise and deadly weapons in the vicinity of civilian areas, the laws of war were violated and disregard for human life has been shown.

In the city of Ganja on 17 October, 21 civilians were killed and more than 50 injured when a SCUD-B ballistic missile hit the Mukhtar Hajiyev neighbourhood. Sudaba Asgarova’s daughter Nigar was killed in the strike, a day before her 15th birthday.

Ramiz Gahramanov told Amnesty International that in the same strike his daughter Khatira, was killed along with her son Orhan, and two daughters Maryam and Laman.

“On 27 October, five people were killed and 14 injured when Armenian forces launched a cluster bomb strike on the village of Qarayusufli, causing widespread damage to homes. One of those killed was seven-year-old Aysu Iskandarli, who was playing on a swing in her garden at the time,” the report said.

The organization also said that Armenian forces also fired several large-caliber rockets into the city of Barda on 28 October, more than 20 km from the frontline. Three rockets landed in the city center, two of them near two hospitals. The third – a Russian-made 9M55 Smerch rocket containing 72 9N235 cluster submunitions – landed in the middle of a busy roundabout, killing 21 civilians.

On 27 September, the day the conflict began, Armenian forces launched an artillery strike in Gashalti, near Naftalan, killing five members of the Gurbanov family and partially destroying their house.

“We had started to renovate the house before the war, now we can’t bear to be here anymore,” Bakhtiar Gurbanov, who lost his parents, along with his brother’s wife, his nephew and niece, told Amnesty International.