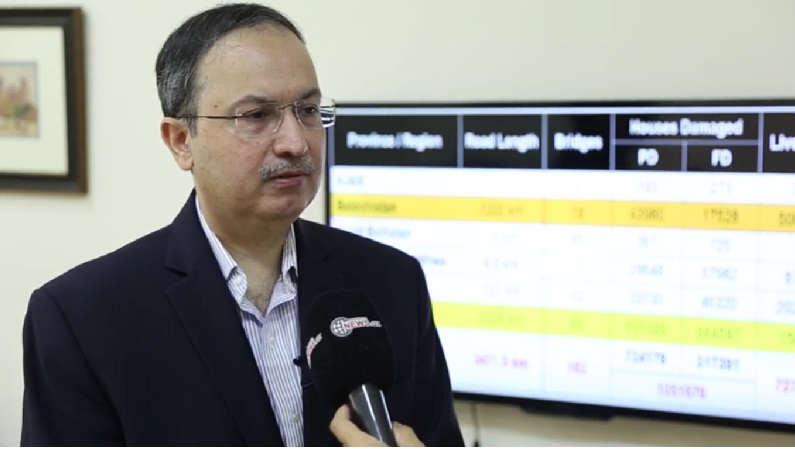 News.Az presents an interview with Mr. Bilal Hayee, Ambassador of the Islamic Republic of Pakistan the Republic of Azerbaijan.

B.H. First of all, let me appreciate the kind attention of our brothers and sisters in Azerbaijan about the devastating and very tragic situation caused by unprecedented floods in Pakistan this year. As many of you know that Pakistan is situated in the region where the monsoon phenomenon happens every year, which brings rains annually from East Bengal, Pakistan also sees rainfalls and will see. But this year we can see that the amount of rain that has fallen on the territory of Pakistan has been four hundred times more than the average rainfall. For example, Balochistan, one of the largest provinces of Pakistan, has received four hundred times more rain than the average, which is unprecedented. And right now, as we speak, one-third of Balochistan is under water, which means that millions of people have to be relocated and evacuated, and their livelihoods have been affected. Secondly, the province of Sindh, which is the southern province of Pakistan, receives all the floods ultimately. A lot population in Sindh has also been affected, and whole towns and cities have also been badly affected by floods. Also, Khyber Pakhtunkhwa province (KPK), which is next to the northern areas of Pakistan, as well as, tourist resorts in the country, has been affected.

So, right now we see that around 33 million people in Pakistan have been directly affected by these floods. Around 10 million people are in temporarily shelters, they need immediate attention in terms of shelter, medicine, food, etc. This is a very grave and serious situation. Yesterday (August 30), the United Nations also launched a flash appeal for international assistance together with the government of Pakistan. It was launched simultaneously in New York and Geneva.  All the UN agencies are now working and appealing to the international community to provide assistance. Now, it is very important for the world to know the severity of these unprecedented floods, which are affecting Pakistan. It will be very important for the international community to know that Pakistan’s contribution to carbon emissions is less than one percent. But Pakistan is among the top 10 most vulnerable countries due to climate change and global warming. These floods are the direct results of climate change and global warming.

Unfortunately, Pakistan is directly affected by these phenomena. So, that’s why we appeal to the international community to come and help the government of Pakistan to address this challenge. The government of Pakistan is mobilizing all its resources, including military machinery, civilian machinery, helicopters, trains, etc. They all are being used to provide assistance to the needy people in the country. Non-governmental organizations in Pakistan are also working in this direction.

Pakistan is also receiving international assistance from friendly countries. And I must thank once again the government of Azerbaijan, which has generously announced the donation of two million US dollars to help Pakistan in this situation. Very soon, we are going to open a bank account here [Azerbaijan], in which people can donate if they want to help the Pakistani nation, and information about this will be shared at a later stage.