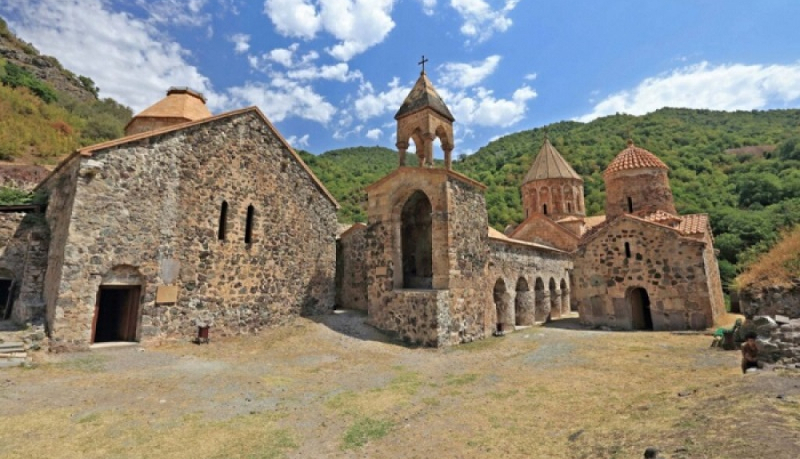 The Albanian-Udi Christian community of Azerbaijan has made a statement on Albanian churches in the territories liberated from occupation.

“We, the Albanian-Udi Christian community in Azerbaijan, which is the successor of the Albanian Apostolic Church, highly appreciate and support the consecutive actions to preserve and restore the historical and religious monuments, including the sanctuaries of the heritage of Albanian Christians, in the territories liberated from occupation over the past year and express our confidence that this process will be finalized as soon as possible thanks to the will and perseverance of the government of Azerbaijan.

At the same time, we would like to state that all the required work has been done for the visit of the members of the Albanian-Udi religious community to the historical Albanian shrines in the territories liberated from occupation despite serious mine threats and a very bad condition of roads. As a result, we, the Udis, have managed to visit Aghoghlan monastery in Lachin district and Khudavang monastery in Kalbajar district, as well as Albanian sanctuaries in Hadrut settlement and Tugh village, as the moral successors of the Albanian Apostolic Church many times over the past year.

We would like to note that the history of structurization of Christianity as an official religion in the Caucasus starts with the Albanian Church. Ancient sources prove that the Albanian Church, which has left ineffaceable traces in the religious and cultural life of not only Azerbaijan, but also the entire Caucasus, is one of the most ancient churches in the world and has apostolic origin. The ancientness of the Albanian Church is proved not just by historic facts, but also by the ancient Albanian sanctuaries which have survived to the present day.

Unfortunately, following different pressure and influence, the Albanian Apostolic Church was abolished in 1836, while the Armenian Gregorian Church attempted to own some of its material and moral heritage. As a result, a great deal of the historic Albanian sanctuaries in Azerbaijan, especially in Karabakh, have been made Gregorian and the archives and documents have also been falsified together with our historical monuments. Making the Albanian heritage, including the Albanian sanctuaries, which are hundreds and even thousands years old, belong to the Gregorian Church has been a government policy of Armenia over the past hundred years. As a result of this, not a single Albanian shrine has been preserved in the contemporary territory of Armenia and the occupied lands of Azerbaijan. Armenia either has changed the architecture of the Albanian sanctuaries to make them Gregorian or has devastated those shrines in which architecture could not be changed.

After Azerbaijan restored its independence and freedom of conscience was fully guaranteed, a historical opportunity emerged to restore the status of the Albanian Apostolic Church and eliminate the injustice we had faced. The Albanian-Udi Christian community was set up and received official registration in 2003 at the initiative of the intellectuals of Udis. The registration of the religious community is the first step towards the revival of the Albanian Apostolic Autocephalous Church. The Apostol Elisha Church, which is considered to be “the mother of the churches” in the Caucasus, in the village of Kish in Shaki district was renovated with the support of the Azerbaijani government and the Albanian-Udi Church called Chotari in the settlement of Nij, which Udis densely populate in Gabala district was officially opened in 2006.

Naturally, the revival of the Albanian-Udi Christian community and the elimination of the historical injustice with the restoration of the Albanian monuments are important not only for Azerbaijan, but also for the entire Christian world in terms of preserving the environment of tolerance in our country. We, the Udis, who are the moral successors of the Albanian Apostolic Church, believe that other Albanian sanctuaries in our territories liberated from occupation will also be restored to a high level like the Albanian shrines in Qabala and Oguz districts.

At the same time, the tolerance of the people of Azerbaijan and the care and support of the Azerbaijani government to representatives of all the religions give us the reason to say that those who belong to the Armenian Gregorian Church will also be treated with humanism. A vivid example of this esteem is the Sacred Gregory Armenian church in the center of Baku, which the Azerbaijani government has preserved and restored. Despite the facts that the Armenian Gregorian Church has inserted influence and pressure and has dealt a heavy blow to the Albanian heritage by ways of appropriation and falsification over centuries, we would like to say that we are ready for cooperation with the Armenian Gregorian Church and co-existence in the territories liberated from occupation for the sake of peace and humanity.”