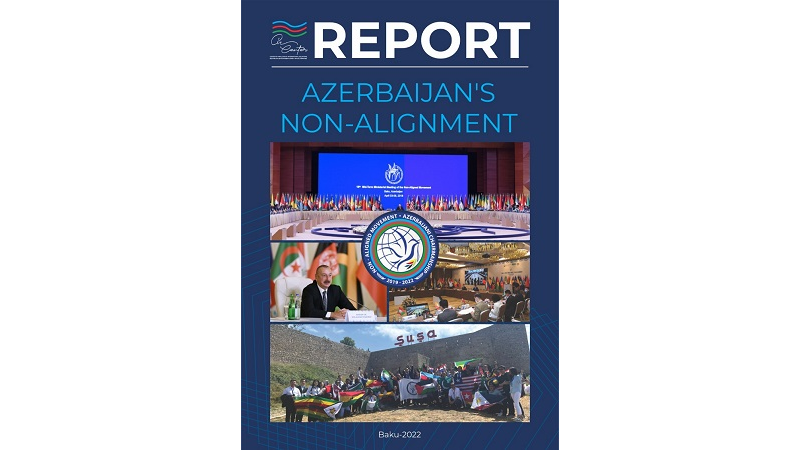 The report contains a thorough study of Azerbaijan’s participation in NAM, its role in the country’s foreign policy and the importance of Azerbaijan’s NAM Chairmanship amid the ongoing geopolitical tensions. It also presents the theoretical basis of the strategy of non-alignment in international relations.

The report stresses that maintaining a balanced, multipronged foreign policy and equidistance from all military-political blocs have defined the core of Azerbaijan’s interactions with its international partners over the decades. As a continuation of this policy, Azerbaijan became a member of the Non-Aligned Movement (NAM) in 2011.

“Although Azerbaijan does not have very deep historical relations with the NAM, it has done a lot in recent years to rejuvenate this institution in the international relations system. The objectives pursued by the NAM and Azerbaijan largely coincide, which creates a good synergy between Azerbaijan and NAM today. In 2019, Azerbaijan became the chairman of the NAM for the period 2019 to 2022, later extended until 2023. This period was unfortunately plagued by a global pandemic due to COVID-19 and ongoing conflicts around the world. During this period, Azerbaijan was able to demonstrate leadership in the movement and rally efforts toward dealing with common problems,” the report reads.

The first section of the report, titled “Theoretical perspectives on Azerbaijan’s non-alignment in international relations,” is written by Vasif Huseynov, Head of Department at the AIR Center. The section sets out to evaluate states’ foreign policy strategies from two realist approaches: structural realism and neoclassical-realism.

The third section of the report is also written by Vasif Huseynov and titled: “Azerbaijan’s role in the region: Acts of balancing in the context of the geopolitics of the Russia–Ukraine war.” According to the author, the Azerbaijani leadership has declared support to Ukraine by highlighting the importance of international law, especially sovereignty and territorial integrity, as the basis for achieving a ceasefire between the conflicting parties.

The last part is written by Shahmar Hajiyev, a leading advisor at the AIR Center, and titled “Energy resources as an important component of Azerbaijan’s independent foreign policy.” In his article, Hajiyev analyzes the oil and gas strategy of Azerbaijan after regaining independence.

Please click on the link below to read the report in English: