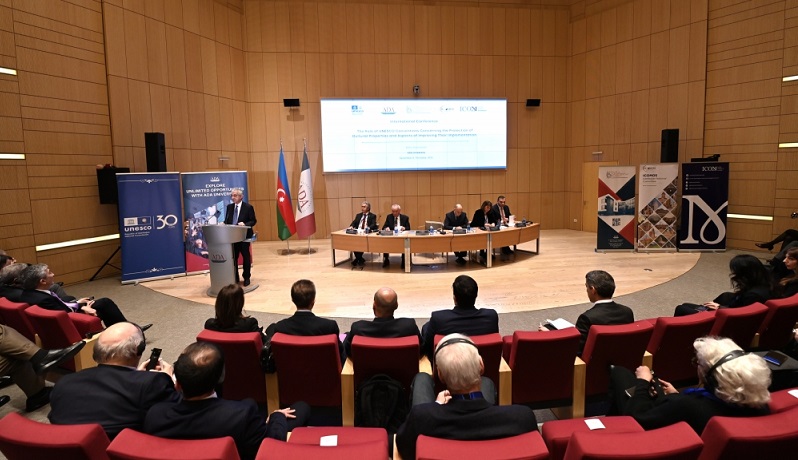 ADA University in Baku on Thursday hosted an international conference on the topic “The Role of UNESCO Conventions Concerning the Protection of Cultural Properties and Aspects of Improving Their Implementation”.

Fariz Ismayilzade, Vice Rector of ADA University and Director of the Institute for Development and Diplomacy, greeted the conference participants. He thanked the participants from France, Israel, Pakistan, Romania, Russia, Slovenia, Türkiye, and Ukraine for visiting Azerbaijan’s Aghdam and Fuzuli districts ahead of the conference to witness the sale of destruction in Karabakh and the ongoing restoration and reconstruction work there.

Minister of Culture Anar Karimov stated that the monitoring of 864 cultural sites in the liberated Azerbaijani territories has already been conducted. He said the monitoring found out that some of these cultural sites were deliberately destroyed, appropriated and used for military purposes by the Armenian side.

Deputy FM Mahmud Mammad-Guliyev said that 2022 marked 30 years of Azerbaijan’s membership in UNESCO. He noted that Azerbaijan has always been a reliable partner and active member of UNESCO. “Despite numerous appeals from Azerbaijan, UNESCO has not yet deployed its technical mission to the liberated Azerbaijani territories,” the deputy minister added.

Fuad Naghiyev, Chairman of the State Tourism Agency, hailed the indispensable role of cultural heritage in boosting the tourism sector.

Zeynab Gul Unal, ICOMOS Vice President, emphasized that cultural monuments are destroyed due to ongoing conflicts around the world. She reiterated the importance of implementing the UNESCO Conventions of 1954 and 1972.