A protest action takes place in the center of Yerevan 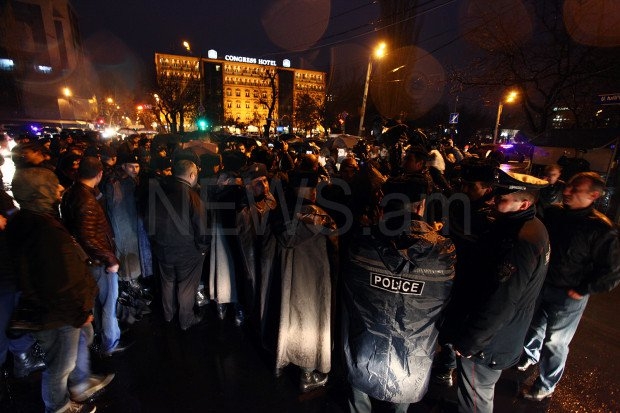 The participants of the protest staged in memory of “Food Provider” Artur Sargsyan are heading to the Liberty Square, where they are going to stage a sit-in, AP

Earlier, they tried to put bread near the entrance to the Justice Ministry building, but the police—led by Deputy Chief of Yerevan Police Valeri Osipyan—blocked their way.

Activist Shahen Harutyunyan stated about the protestors’ wish to approach the building of the ministry in order to express their protest but the police didn’t allow them to do that.

Consequently, the protestors decided to return to the Liberty Square and stage a sit-in there.

Artur Sargsyan, who was charged with aiding the Sasna Tsrer armed group, was released from prison on December 31, 2016, since he had an illness that was incompatible with imprisonment.

On February 9, however, he was arrested yet again.

Subsequently, Sargsyan went on hunger strike, and demanded that his preventive measure of arrest be commuted.

A few days ago, and with a written guarantee by several dozen MPs, he was released from prison and immediately taken to hospital.

Several days ago, however, he left the hospital on his own volition.

But his health grew worse on Wednesday evening. He was taken to hospital, where he underwent surgery, but he did not regain consciousness after this operation.

The Sasna Tsrer armed group had taken over a police patrol regiment building in Yerevan, taken hostages, but later surrendered, in July 2016.

On July 26, Artur Sargsyan had broken through a police wall with a vehicle loaded with food, and delivered food to the members of this armed group.