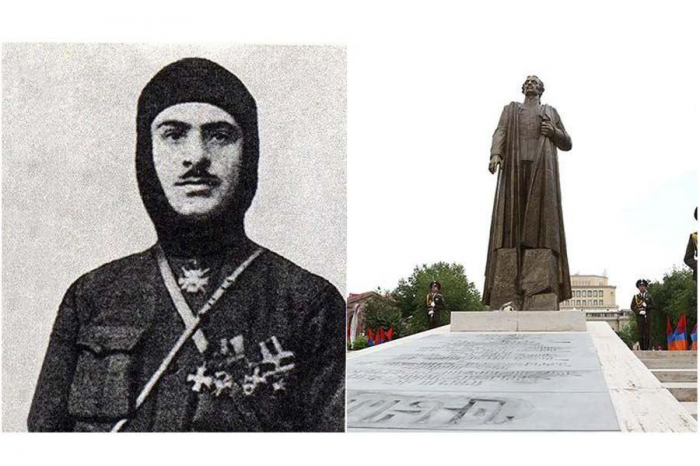 A few days ago, a bust of Armenian "national hero" Garegin Nzhdeh was erected in the center of the Khojavend region of Azerbaijan which is under the control of Russian peacekeepers, the grandchildren of those who fought against the Nazis during the Great Patriotic War.

In recent years, the glorification of fascist collaborators, Garegin Nzhdeh in particular, visibly emerged as an upward trend in Armenia, the strategic ally of Russia. Films were shot, streets, squares and even metro stations are named after him. Unveiling of a monument to Garegin Nzhdeh with the presence of Armenian leadership in Yerevan on May 28, 2016 was the culmination point.

Recall that Garegin Nzhdeh allied with Nazi forces in World War II against the Soviet Union and was the espouser of fascist ideology, it becomes clear that why the glorification of Nzhdeh can't be ignored.

In 1942, Garegin Nzhdeh together with another Armenian fascist collaborator Drastamat Kanayan (better known as Dro) organized the 812th Armenian Battalion of around 8,000 soldiers recruited from Armenian captives and representatives of the diaspora in Europe, later developed into the “Armenian Legion”. This legion fought against the Soviet army, and also performed punitive functions and participated in criminal acts, including the Holocaust of the Jewish people. Drastamat Kanayan was nicknamed ‘the Jew hunter’ by the nazis. He lived out the rest of his life in the US after the fall of Nazi Germany and died in Massachusetts in 1956. His body was brought back to the Soviet Armenia and was given a state funeral. Nzhdeh was arrested for 25 years and ended his days in the Vladimir prison in 1955. Later, the remains of Garegin Nzhdeh from the grave at the Vladimir prison were secretly brought and reburied in the yard of Spitakavor Monastery, Armenia in 1983.

The revival of Nazism and neo-fascism in the post-Soviet space through the heroization of the people who collaborated with Nazi forces is an insult to the people who fought against the German fascist invaders, as well as an extreme manifestation of disrespect for the millions of people killed during the World War II. The depiction of Nazism as heroic, the spread of neo-Nazism and other practice that facilitate the spread of racism, xenophobia and related forms of intolerance must be completely eliminated. However, Armenians do not have a sense of collective guilt for the crimes of their fascists and Nazi collaborators, but a kind of collective pride. Today, Armenian nationalists are trying to prove that "Hero of Armenia" Garegin Nzhdeh did it "for the sake of Armenia". Moreover, Garegin Nzhdeh who collaborated with the Third Reich and fought against the USSR repeatedly made propaganda speeches by declaring: "Whoever dies for Germany, he dies for Armenia." He also strived for the racial purity of Armenians. In 1933, Nzhdeh founded in Boston a racist Tseghakronism movement, which emulated Aryan supremacy theories of the Nazis and advocating for an "Armenian Master Race". His name, furthermore, epitomizes the mass killings and the ethnic cleansing of Azerbaijanis in Zangezur. Paradoxically, Armenian people constantly cry crocodile tears about the "Armenian genocide".

Sadly, Armenian political elites continuously feed its domestic public with fascist and extremist ideology which is included in the curriculum of Armenian secondary and higher schools; hence the younger generation are being brought up in such a spirit which is difficult to cure.

After the trilateral statement signed by the Azerbaijani, Russian and Armenian leaders on November 10, a new regional security environment was set out in the South Caucasus by putting an end to the 30-year armed conflict between Armenia and Azerbaijan. However, the myths and perceptions instilled in Armenian public both before and during the conflict, as well as installation of Fascist monuments are impeding the peacebuilding process between two nations. In addition, the fact that the propaganda of fascism remains on the agenda of Armenian government is the main risk to the prospects of multilateral cooperation in the region in the post-war period. For the stability and security of the South Caucasus region, countries and peoples must fight together against the heroization of Garegin Nzhdeh's ideas. Therefore, it is impossible to attain a sustainable peace in the region without detaching of Armenian people from the illusion.