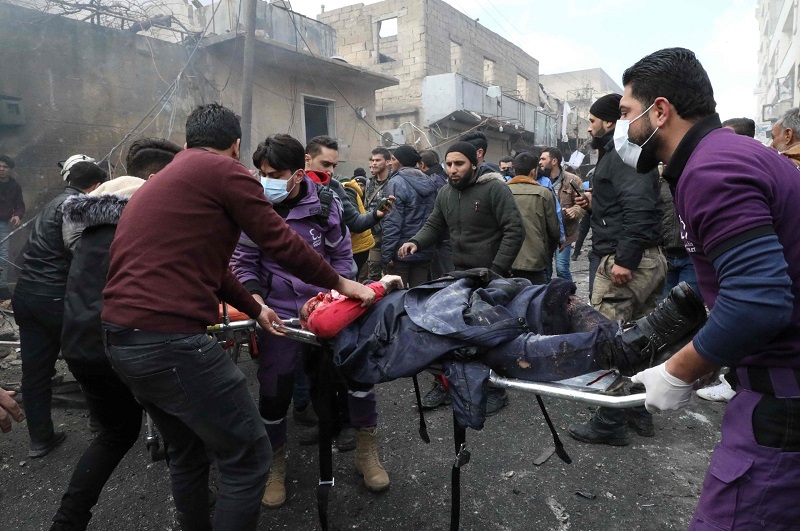 The first attack near a cultural center in the town of Azaz killed seven civilians, including a young girl, the Britain-based Syrian Observatory for Human Rights (SOHR) said in an updated toll.

An Agence France-Presse (AFP) reporter at the scene saw a mangled car ablaze, sending black smoke billowing into the sky.

A man rushed away from the site of the blast, carrying what appeared to be a child wrapped in a bloodied cloth.

The Observatory said around 30 people were also wounded in the attack.

The blast took place near the town’s cultural center, which is being used as the base of a self-styled opposition government, a local police source told Deutsche Presse-Agentur (DPA).

In the second incident, a car bomb targeted a checkpoint manned by the moderate opposition forces near the town of Al-Bab, killing five fighters, the Observatory added.

The security checkpoint was manned by the self-styled al-Hamzah Brigade, it added.

Such bombings regularly hit areas of northern Syria held by Turkish forces and their Syrian proxies.

On Saturday, explosives planted in another vehicle took the lives of eight civilians, including four children, in the city of Afrin, which Turkish forces liberated from YPG terrorists in 2018.

Syria’s war has killed more than 387,000 people and displaced millions since starting in 2011 with the brutal repression of anti-government protests.

Ankara considers the YPG, which was deployed by the U.S.-led anti-Daesh coalition within the pretext of fighting the terrorist group on the ground, a grave national security threat.